The place where the dream began:

La Boscaiola, a seventeenth-century farmstead in the heart of the Franciacorta area.

This place has always been home to wines with a soul.

La Boscaiola’s recent history, under the guidance of the Cenci family, dates to 1960, when Nelson Cenci – a physician and writer who served in Italy’s Alpini Corps – took over the farmstead and its semi-abandoned vineyards, restoring them to their former splendour and laying the foundations for the production of the Vigneti Cenci wines the estate is known for to this day.

For over 30 years now, we have been breathing life into our wines through our attention to even the smallest details: the countryside, the harvest, and the long, slow ageing on the lees.

Our love of the land is also evident in how we allow our wines to bring out the best in it, with a method that uses only natural grape sugars.

The story of Nelson Cenci

He’s a familiar figure to the soldiers in the Alpini Corps. They know exactly who Nelson Cenci was and what he achieved, in wartime and in peacetime. They used to see him at the gatherings. They watched him on TV, when he was invited to the famous “Porta a Porta” programme, and they listened to him at the meetings. They heard his warm, calm, caring voice speak, with a hint of nostalgia, of episodes that marked a long life: his own. A life replete with sensations, memories, suffering and friendship.

Read the whole story
And they’ve read about him too: you might remember Nelson Cenci as one of the main characters in the first of the famous books by Mario Rigoni Stern, “The Sergeant in the Snow”, which drew so many young men towards the Alpini Corps. Nelson was the author of books, short stories and poetry. He celebrated his 92nd birthday on 21 February. The last of his literary efforts was ready for Christmas.“…Accanto al camino…” is not a novel, nor a historical treatise: it’s a warm, rich, nostalgic, impassioned series of reflections on episodes and sensations, on his own life. It’s the passing of the torch from the older generation to the new, in the Alpini Corps, and outside it. Succinct, poetic chapters. 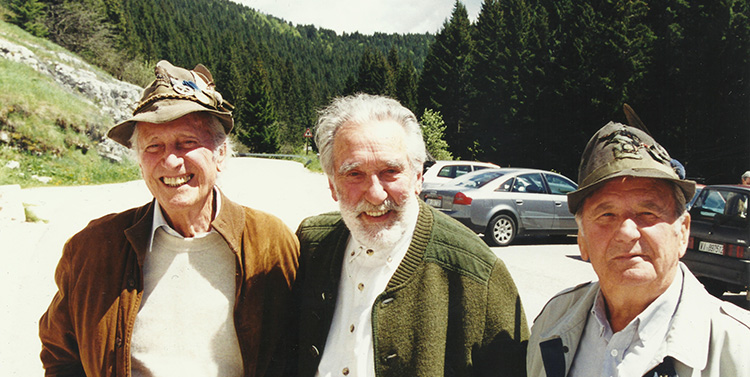 The story of a life with roots stretching back to that far-off 1919 that witnessed his birth in Rimini. A childhood spent in the quiet woodlands of a remote village in the Apennines between Tuscany and Emilia Romagna, in close contact with nature. From the winter snow to the unforgettable fun of summer days, until a move, all alone, at the age of just twelve, to the big city: Milan, to which he would later dedicate a poignant portrait. What a marvel it was, to the enchanted gaze of youth, and what it’s become today, ruined by the modern age. The Fascist youth organisation and its games, and then its politics, University, the rowing competitions, the victory in the Milan Fascist University Group’s eight at the Littorali Sports Event in 1940 at the Idroscalo artificial lake. Military service with the Alpini Corps, in Montenegro with the Julia Brigade, in Russia with the Tridentina Brigade, the terrifying retreat. The portrait of his friend, Mario Rigoni Stern. The account of Carlo Gnocchi, whom he met in Montenegro and subsequently in Russia, and saw once again in the little church on Monte Orfano, above Cologne Bresciano, the place he retired to in his latter years. His career as a physician, combating pain and helping the suffering. The letter to his two great-grandchildren, Mattia and Alice, the children of Francesco (who also served in the Alpine Corps) and grandchildren of Nelson’s eldest daughter, Giuliana. And numerous splendid poems, two of them written in the Milanese dialect, dedicated to the city where he spent his working life. Of particular moral significance, the chapter “Ritorno sul Don”, and the encounter with Vasilij, a hero of the nation. Nelson concludes that: “Man can kill in self-defence, and we did to save ourselves and to be able to return to our homes”. He ends with the words: “At that moment, I hoped with all my might that I had not taken anyone’s life during that terrible tragedy”. Food for thought! This is a book brimming with tenderness, with a love for life, nature and friendship. And for his dog, Gherd, a German Shephered, to whom the moving “Il nostro più caro amico” (Our Dearest Friend) is dedicated. A beautiful portrait of a time that is no more, when the word “Nation” was spoken with respect; when Duty was the sacred commitment of young folk he describes as proud to be and to feel Italian. A bitter contrast with the present day. This makes for an exquisite piece of writing, to savour seated in an armchair by the fireside.

The second and third
Cenci generation

All the aromas
of our vineyard on your table